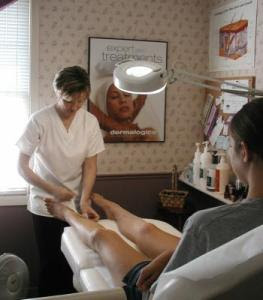 Like the Brazilian Wax for females, getting a Boyzilian entails the waxing off of all the hair "down there". Yes, every single strand of it. Although the first Brazilian was done in New York city in the early 1990s, little is known about the origins of the Boyzilian.
.
There has been many articles about the growing in popularity in Singapore, both women and men. It became a hot topic three years ago after footballer David Beckam admitted being such a fan that he has a personal waxer who visits his home. There are four Strip Co-ed (unisex) outlets in Singapore, located Paragon, Shaw Centre, The Cathay and the recently opened outlet at Raffles City. After making an appointment, I headed down to Strip Co-ed at Shaw Centre for my appointment.
.
Upon reaching, I was greeted by the counter staff to confirm my appointment. As it was my first visit, I was being asked to fill in my particulars and some questions were asked, for example, "Are you on any medication that contains alcohol?". Next, i was being introduced to my waxer, Zul. Then i was being brought to this room, and was told to strip and lie on the bed and cover myself with a towel. While Zul was preparing the wax, i did a little chat with him (to calm my nerves, LOL). I found out the different types of wax they use for different body parts. And he has been working at that outlet for three years, ever since the outlet opened. (Hmm, an experienced waxer, i should be in good hands, i thought to myself).
.
Well, the whole Boyzilian lasted for about 30mins flat, and i must say the pain-factor is still bearable. Three easy steps - wax, paper, rip. It actually means apply hot wax over hair, press wax paper over wax, and rip off paper! Zul was very attentive and kept asking if the wax was too hot for me (maybe because i am a first timer). He even taught me a breathing exercise during the Boyzilian, so as to lessen the pain...and it worked! After the Boyzilian, Zul proceeded to wax both my legs, one at a time. Strangely enough, after enduring the Boyzilian, my body and mind got used to the pain, to the extent that i barely felt it during the waxing of the legs. LOL.
.
You can bet that i will be going back again...after all, the acceptance of Boyzilian (or Brazilian) hinges on the hygiene factor, which is the whole point of having a Boyzilian. Besides, who can resist baby smooth legs as well? LOL.
Decorated by marstyle at 2:04 AM

can i ask, how was the hair re-growth after the boyzilian? i'm considering one too.

I guess it depends on individual as well, for my case, i have to go back every fortnightly, so that it doesnt look and feel to uncomfortable.

hey..
so but does it become longer and thicker in growth after that?

not really. in fact, the only thing u shld be worried abt is in-grown hair. but it didnt happen to me..thankfully.

My name is Zak. I am a 2nd year student from the WKW School of Communication and Information at NTU.

I am doing a trend story, part of my module requirement on newswriting and reporting, on how Singaporean men are more confident and health conscious and not afraid to try such a waxing treatment as this boyzilian waxing.

I would like to know more about your experience and your comments on this waxing process and those who would go for such waxing. Do contact me on my email at mohd_zakaria@hotmail.com.

I hope to hear from you soon and appreciate your help on this.